No Logo: Taking Aim at the Brand Bullies

The growth in the power and reach of multinational corporations can be traced to the idea developed by management theorists in the mid-1980s that corporations must primarily produce brands, as opposed to products. The Nikes and Hilfigers took the cue. Riding the wave of so-called trade liberalization, they moved manufacturing overseas to low-wage countries. They no longer owned the means of production. It was literally unimportant. The new economic model poured money into marketing and sponsorship. Uberbranding, from caps and shirts to schoolbooks and sporting arenas, became the operative mode. Activists from Prague to Melbourne are resisting, saying “No Logo!” October 13, 2000. 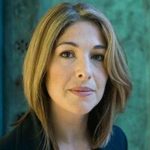 Naomi Klein of Canada, an award-winning journalist, author, and filmmaker, is at the forefront of environmental activism. Her articles appear in major newspapers and magazines all over the world. She is the author of many books including This Changes Everything, No is Not Enough, The Battle for Paradise and On Fire.

Be the first to review “No Logo: Taking Aim at the Brand Bullies” Cancel reply