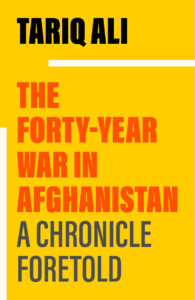 The Forty-Year War in Afghanistan: A Chronicle Foretold

The occupation of Afghanistan is over, and a balance sheet can be drawn. These essays on war and peace in the region reveal Tariq Ali at his sharpest and most prescient.

Rarely has there been such an enthusiastic display of international unity as that which greeted the invasion of Afghanistan in 2001. Compared to Iraq, Afghanistan became the “good war.” But a stalemate ensued, and the Taliban waited out the NATO contingents. Today, with the collapse of the puppet regime in Kabul, what does the future hold for a traumatized Afghan people? Will China become the dominant influence in the country?

Tariq Ali has been following the wars in Afghanistan for forty years. He opposed Soviet military intervention in 1979, predicting disaster. He was also a fierce critic of its NATO sequel, Operation Enduring Freedom. In a series of trenchant commentaries, he has described the tragedies inflicted on Afghanistan, as well as the semi-Talibanisation and militarisation of neighboring Pakistan. Most of his predictions have proved accurate. The Forty-Year War in Afghanistan: A Chronicle Foretold brings together the best of his writings and includes a new introduction.

Tariq Ali, an internationally renowned writer and activist, was born in Lahore, Pakistan. For many years he has been based in London where he is an editor of New Left Review. A charismatic speaker, he is in great demand all over the world. In his spare time, he is a filmmaker, playwright, and novelist. He is the author of many books including The Clash of Fundamentalisms, Pirates of the Caribbean, Speaking of Empire & Resistance with David Barsamian, The Duel: Pakistan on the Flight Path of American Power, The Obama Syndrome, The Extreme Centre and The Forty-Year War in Afghanistan: A Chronicle Foretold.

Be the first to review “The Forty-Year War in Afghanistan: A Chronicle Foretold” Cancel reply