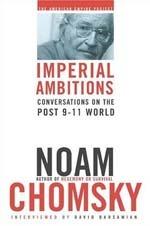 Timely, illuminating, and urgently needed, this volume of interviews conducted by award-winning radio journalist David Barsamian features Noam Chomsky discussing U.S. policies in the increasingly unstable post-9/11 world. In these exchanges, appearing for the first time in print, Chomsky offers his frank, provocative, and informed views on the invasion and occupation of Iraq, the doctrine of preemptive strikes against so-called rogue states, and the growing threat to international peace posed by the U.S. drive for domination. In his inimitable style, Chomsky also dissects the propaganda system that fabricates a mythic past and airbrushes inconvenient facts out of history.

Barsamian, recipient of the ACLU’s Upton Sinclair Award for independent journalism, has conducted more interviews and radio broadcasts with Chomsky than any other journalist. Enriched by their unique rapport, Imperial Ambitions explores new ground, including the 2004 presidential campaign and election, the future of Social Security, and the increasing threat of global warming. The result is an enlightening dialogue with one of the leading thinkers of our time, a startling picture of the turbulent world in which we live, and an affirmation of the many possibilities for a more hopeful and humane future.

“Reading Chomsky today is sobering and instructive… He is a global phenomenon … perhaps the most widely read voice on foreign policy on the planet.”
—The New York Times Book Review

A reviewer for London’s The Daily Telegraph wrote in 2001 that if Noam Chomsky didn’t exist “it would be necessary to invent him – the one thing that his polemics are guaranteed to do is make you think”. Imperial Ambitions is a collection of interviews by David Barsamian, whose dialogues with liberal intellectuals are syndicated on US radio. He first worked with Chomsky in 1986 and, in this collection, he leads the MIT professor of linguistics and left-wing polemicist through a series of discussions, spanning March 2003 to February this year, about the US and the potential global ramifications of its policies. Barsamian says the essence of Chomsky is that understanding the truth or knowing how to act is “not so complicated”. Those who have tackled Chomsky’s latest book, Hegemony or Survival, may be excused for thinking otherwise, but Barsamian’s skillful editing makes accessible Chomsky on such topics as the distortion of history and memory, and, in “Another World is Possible”, a discussion of fundamentalism and the American right.

Be the first to review “Imperial Ambitions: Conversations on the Post 9-11 World” Cancel reply