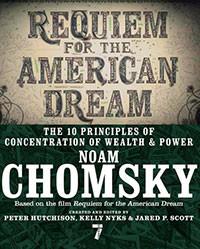 Requiem for the American Dream

What are the ten principles of concentration of wealth and power at work in America today? They’re simple enough: reduce democracy, shape ideology, redesign the economy, shift the burden onto the poor and middle classes, attack the solidarity of the people, let special interests run the regulators, engineer election results, use fear and the power of the state to keep the rabble in line, manufacture consent, marginalize the population. In Requiem for the American Dream, Chomsky devotes a chapter to each of these ten principles, and adds readings from some of the core texts that have influenced his thinking to bolster his argument.

Noam Chomsky, by any measure, has led a most extraordinary life. In one index he is ranked as the eighth most cited person in history, right up there with Aristotle, Shakespeare, Marx, Plato and Freud. The legendary MIT professor is a major contributor to 21st century linguistics. In addition to his pioneering work in that field he has been a leading voice for peace and social justice for many decades. Chris Hedges says he is “America’s greatest intellectual” who “makes the powerful, as well as their liberal apologists, deeply uncomfortable.” He is Institute Professor (emeritus) in the Department of Linguistics and Philosophy at MIT and Laureate Professor of Linguistics and Haury Chair in the Program in Environment and Social Justice at the University of Arizona. At 91, he still gives lectures all over the world. He is the author of scores of books, including Propaganda & the Public Mind, How the World Works, Power Systems and Global Discontents with David Barsamian.

1 review for Requiem for the American Dream