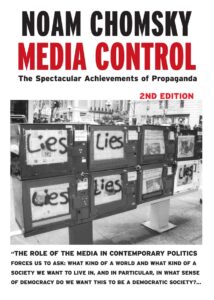 Chomsky’s back-pocket classic on wartime propaganda and opinion control has been updated and expanded into a two-section book and redesigned following the acclaimed format of his Open Media anti-war bestseller, 9-11. The new edition of Media Control also includes “The Journalist from Mars,” Chomsky’s 2002 talk on the media coverage of America’s “new war on terrorism.”

Chomsky begins by asserting two models of democracy—one in which the public actively participates, and one in which the public is manipulated and controlled. According to Chomsky “propaganda is to democracy what the bludgeon is to a totalitarian state,” and the mass media is the primary vehicle for delivering propaganda in the United States. From an examination of how Woodrow Wilson’s Creel Commission “succeeded, within six months, in turning a pacifist population into a hysterical, war-mongering population,” to Bush Sr.’s war on Iraq, Chomsky examines how the mass media and public relations industries have been used as propaganda to generate public support for going to war.

Originally written in the immediate aftermath of the Gulf War, Media Control cites numerous examples of how Bush Sr. pushed the American population into supporting an attack on Iraq.

Noam Chomsky, by any measure, has led a most extraordinary life. In one index he is ranked as the eighth most cited person in history, right up there with Aristotle, Shakespeare, Marx, Plato and Freud. His contributions to modern linguistics are legendary. In addition to his pioneering work in that field, he has been a leading voice for peace and social justice for many decades. Chris Hedges says he is “America’s greatest intellectual” who “makes the powerful, as well as their liberal apologists, deeply uncomfortable.” He is Institute Professor Emeritus in the Department of Linguistics and Philosophy at MIT and Laureate Professor of Linguistics and Haury Chair in the Program in Environment and Social Justice at the University of Arizona. At 93, he is still active; writing and giving interviews to the media all over the world. He is the author of scores of books, including Propaganda & the Public Mind, How the World Works, Power Systems and Global Discontents with David Barsamian. His latest books are Climate Crisis and the Global Green New Deal, Consequences of Capitalism: Manufacturing Discontent and Resistance, and Chronicles of Dissent: Collected Interviews with David Barsamian, 1984-1996.

1 review for Media Control: The Spectacular Achievements of Propaganda