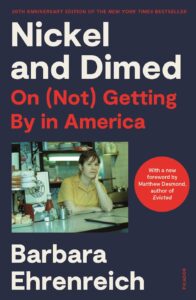 In this now classic work, Barbara Ehrenreich, our sharpest and most original social critic, goes “undercover” as an unskilled worker to reveal the dark side of American prosperity.

Millions of Americans work full time, year round, for poverty-level wages. In 1998, Barbara Ehrenreich decided to join them. She was inspired in part by the rhetoric surrounding welfare reform, which promised that a job—any job—can be the ticket to a better life. But how does anyone survive, let alone prosper, on $6 an hour?

To find out, Ehrenreich left her home, took the cheapest lodgings she could find, and accepted whatever jobs she was offered. Moving from Florida to Maine to Minnesota, she worked as a waitress, a hotel maid, a cleaning woman, a nursing-home aide, and a Wal-Mart sales clerk. She lived in trailer parks and crumbling residential motels. Very quickly, she discovered that no job is truly “unskilled,” and that even the lowliest occupations require exhausting mental and muscular effort. She also learned that one job is not enough; you need at least two if you int to live indoors.

Nickel and Dimed reveals low-rent America in all its tenacity, anxiety, and surprising generosity—a land of Big Boxes, fast food, and a thousand desperate stratagems for survival. Read it for the smoldering clarity of Ehrenreich’s perspective and for a rare view of how “prosperity” looks from the bottom. You will never see anything—from a motel bathroom to a restaurant meal—in quite the same way again.

Barbara Ehrenreich was a renowned social critic, journalist, feminist and author. She was born in Butte, Montana and studied chemistry at Reed College in Oregon and later received a Ph.D. in cellular immunology at Rockefeller University in New York. But she left a possible career in science and teaching to become a muckraker in the tradition of Ida B. Wells and Lincoln Steffens. She wrote many books. Her articles appeared in Ms., Mother Jones, and The Progressive. She wrote incisively and with compassion about working people and the hardships they endure. To write about the underclass she went undercover and took low-wage jobs such as hotel maid, cleaning houses, nursing home aide and waitressing. Through her work she made the invisible working poor visible. She was long active in the DSA, Democratic Socialists of America. In 2012 she founded the Economic Hardship Reporting Project, seeking to place the crisis of poverty and economic insecurity at the center of the national political conversation. Her best-known book Nickel and Dimed, a classic in social justice literature, has sold millions of copies. She passed away on September 1, 2022. Katha Pollitt in The Nation wrote “Barbara accomplished so much, but what I love most about her work is that it was never boilerplate. She always found a way to take her argument to a deeper level. And there was always empathy—for the people who are overlooked, whose struggles are disregarded, who have to fight for food and shelter and a halfway decent life, for every shred of dignity and recognition.”

Be the first to review “Nickel and Dimed” Cancel reply