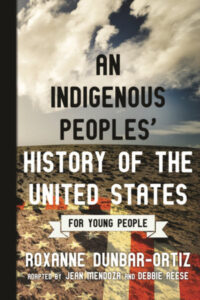 An Indigenous Peoples’ History of the United States for Young People

This new version of An Indigenous Peoples’ History of the United States brings a painful but necessary reframing of our history to younger readers and teachers looking to better understand the legacy of Indigenous peoples’ resistance, resilience, and continued struggle against imperialism. Going beyond the story of America as a country “discovered” by a few brave men in the “New World,” indigenous human rights advocate Roxanne Dunbar-Ortiz reveals the roles that settler-colonialism and policies of American Indian genocide played in forming our national identity.

The original text is fully adapted by renowned curriculum experts, Debbie Reese and Jean Mendoza, for readers age 12 to 19 to include discussion topics, archival images, original maps, timelines, a glossary, recommendations for further reading, and other materials to encourage students to think critically about their own place in history.