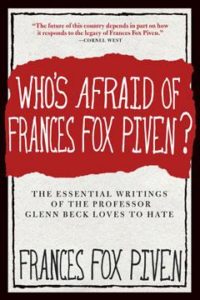 “Piven, throughout her career as an activist and academic, has embodied the best of American democracy.” —The Nation

How is it that Frances Fox Piven, a distinguished university professor, past president of the American Sociological Association, and recipient of numerous awards and accolades for her work could suddenly find herself all over the Internet—and Fox TV—as the subject of a vicious and relentless hate campaign spearheaded by darling of the right Glenn Beck? Is she “an enemy of the constitution” (Glenn Beck)? Or is she “the embodiment of the best of American democracy” (The Nation)?

Who’s Afraid of Frances Fox Piven? is a concise, accessible introduction to Piven’s actual thinking (versus others’ claims about what she supposedly thinks), from her early work on welfare rights and “poor people’s movements”—written with her late husband, Richard A.Cloward—through her influential examination of America’s voting habits and her most recent work on the possibilities for new movements for progressive reform.

For anyone who is skeptical of the World According to Beck, here is a guide to the authentic ideas behind the media frenzy. This stunning volume traces the pioneering trajectory of Frances Fox Piven’s work over some fifty years, complete with new introductory material and recently published popular articles by the professor. Including a revealing interview by the acclaimed author and public philosopher Cornel West, Who’s Afraid of Frances Fox Piven? is a major corrective to right-wing bombast—and a celebration of the thinking of one of our most important scholar/activists.

Frances Fox Piven is a leading activist scholar. She is Distinguished Professor of Political Science and Sociology at CUNY. She is co-author with Richard Cloward of numerous award-winning books including Regulating the Poor and The Breaking of the American Social Compact. She is the author of Why Americans Still Don’t Vote, The War at Home, Who’s Afraid of Frances Fox Piven and Lessons for Our Struggle.

Be the first to review “Who’s Afraid of Frances Fox Piven?” Cancel reply