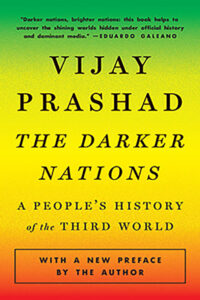 The Darker Nations: A People’s History of the Third World

The landmark alternative history of the Cold War from the perspective of the Global South, reissued in paperback with a new introduction by the author.

In this award-winning investigation into the overlooked history of the Third World—with a new preface by the author for its fifteenth anniversary—internationally renowned historian Vijay Prashad conjures what Publishers Weekly calls “a vital assertion of an alternative future.” The Darker Nations, praised by critics as a welcome antidote to apologists for empire, has defined for a generation of scholars, activists, and dreamers what it is to imagine a more just international order and continues to offer lessons for the radical political projects of today.

With the disastrous U.S. withdrawal from Afghanistan and the rise of India and China on the global scene, this paradigm-shifting book of groundbreaking scholarship helps us envision the future of the Global South by restoring to memory the vibrant though flawed idea of the Third World whose demise, Prashad ultimately argues, has produced an impoverished and asymmetrical international political arena. No other book on the Third World—as a utopian idea and a global movement—can speak so effectively and engagingly to our troubled times.

Vijay Prashad is an internationally renowned historian and journalist. He is the director of Tricontinental: Institute for Social Research and chief correspondent for Globetrotter. He is the author of many books including The Darker Nations: A People’s History of the Third World and Washington Bullets: CIA, Coups, and Assassinations.

Be the first to review “The Darker Nations: A People’s History of the Third World” Cancel reply