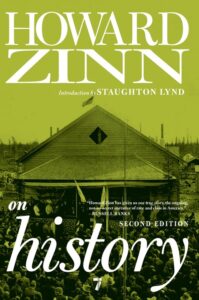 Howard Zinn On History brings together twenty-seven short writings on activism, electoral politics, the Holocaust, Marxism, the Iraq War, and the role of the historian, as well as portraits of Eugene Debs, John Reed, and Jack London, effectively showing how Zinn’s approach to history evolved over nearly half a century. Chosen by Zinn himself as writings on history he believed to have enduring value, these essays are examples of the kind of passionate engagement he believed all historians, and indeed all citizens of whatever profession, need to have, standing in sharp contrast to the notion of “objective” or “neutral history” espoused by some. Zinn shares his fundamental thinking that social movements—people getting together for peace and social justice—can change the course of history.

Howard Zinn, professor emeritus at Boston University, was perhaps this country’s premier radical historian. He was born in Brooklyn in 1922. His parents, poor immigrants, were constantly moving to stay, as he once told me, “one step ahead of the landlord.” After high school, he went to work in the Brooklyn Navy Yard. During World War II, he saw combat duty as an air force bombardier. After the war, he went to Columbia University on the GI Bill. He taught at Spelman, the all-black women’s college in Atlanta. He was an active figure in the civil rights movement and served on the board of SNCC, the Student Nonviolent Coordinating Committee. He was fired by Spelman for his activism. He was among the first to oppose U.S. aggression in Indochina. His book Vietnam: The Logic of Withdrawal was an instant classic. A principled opponent of imperialism and militarism, he was an advocate of non-violent civil disobedience. He spoke and marched against the U.S. wars on Afghanistan and Iraq. His masterpiece, A People’s History of the United States, continues to sell in huge numbers. Among his many other books are You Can’t Be Neutral on a Moving Train, Failure to Quit: Reflections of an Optimistic Historian and Original Zinn with David Barsamian.  Shortly before his death he completed his last great project, the documentary The People Speak. Always ready to lend a hand, he believed in and practiced solidarity. Witty, erudite, generous and loved by many the world over, Howard Zinn, friend and teacher, passed away on January 27, 2010. He would say, Don’t mourn. Get active. The struggle for peace and justice continues.

Be the first to review “Howard Zinn On History” Cancel reply