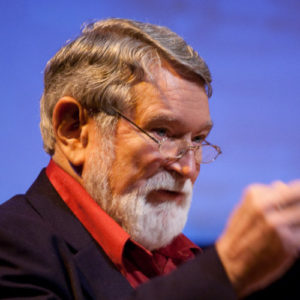 Since the beginning of time people have been telling stories from Gilgamesh in Iraq to The Odyssey in Greece. These tales convey lessons and societal values and warnings about arrogance. The U.S. spins its own yarns. Take say, the one about brave pioneers who fought off savage Indians to settle the country and establish dominion from coast to coast. That Indians were defending their land against invasion is, well, an inconvenient fact. Fast forward to today and there are stories about the economy. If you work hard enough you’ll be justly rewarded. Money is everything. The market is all knowing. Bow before it. Worship it. The Earth is simply a source of raw materials. Inequality and environmental destruction are unfortunate but unavoidable. How do you change the narrative, change the story to reflect an ethical, compassionate and nurturing worldview?

Toward an Ecological Civilization

Will Rogers, a famous U.S. humorist once said, “If you find yourself in a hole, stop digging.” Good advice. Wish that it were heeded when it comes to climate change. Scott Pruitt, the head of the Environmental Protection Agency, says, “there's tremendous disagreement” about climate change. Is there? The scientific consensus is close to 100%. The fox is in charge of the henhouse. While he was Attorney General of Oklahoma, Pruitt worked hand and glove with the oil and gas industry. He filed 14 lawsuits against the EPA. President Trump has called climate change a “hoax” concocted by the Chinese. He is cutting EPA staff and slashing its budget. Our precious planet is in danger. We should listen to our Native American and First Nations water and land protectors and nurture and cherish the Earth and move toward an ecological civilization.

Money, you know, is the root of all evil. The pursuit of it no matter the consequences has led to us, as the New York Times describes it, “speeding toward environmental catastrophe.” Unregulated predatory capitalism and its obsession with generating profits no matter the cost to Nature is endangering civilization as we know it. Globally people, young people in particular, are demanding action. Teenagers like Greta Thunberg, Xiye Bastida, Haven Coleman, Isra Hirsi, and Alexandria Villasenor and groups like the Sunrise movement, Extinction Rebellion, and 350.org are leading the way and working for a future that is safe and secure from climate disruption. All over the world in late September and going forward there will be strikes, walkouts and other actions. We must move from a money-oriented society to one in harmony with and respect for the Earth.

David Korten was an insider in the development establishment for several decades. He worked for the Ford Foundation and USAID and taught at Harvard University’s Graduate School of Business. Having severed his ties to the past, today he is a leading voice for economic and social justice. He is a co-founder and board chair of YES! magazine. He is the author of When Corporations Rule the World, The Great Turning, Agenda for a New Economy and Change the Story, Change the Future.

Be the first to review “David Korten 3-Pack” Cancel reply