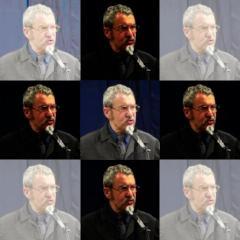 Discussions about democracy probably start in Athens about 2500 years ago. A truism is society is democratic to the extent that its citizens play a meaningful role in managing public affairs. Democracy is located within the capitalist economic system infamous for producing colossal inequality. There's no level playing field, as great income and wealth translate into political power for the haves at the expense of the have nots. We have procedural democracy: elections, broadcast debates, primaries, etc. Citizens are largely marginalized, overwhelmed by big money and powerful lobbies. Look at the widespread demand to ban assault weapons of war or for universal single-payer health care or protecting the environment or affordable housing. People want those things but elites have a simple message. Vote. Then go home and leave everything to us. Actual democracy is hollowed out. A Davos-type class rules.

Class and power are closely correlated, That societies have a ruling class is derided as passe Marxist rhetoric. But to deny its existence is folly. Class can be measured by one’s income and savings, and ownership of stocks, bonds and property. Power is more difficult to calibrate. It is the capacity of a ruling class to produce outcomes that enrich and enhance its status. There are many forms of power such as economic, political and military. That a ruling class acts to promote its interests by getting together and planning seems only logical. To simply dismiss these meetings as conspiracies is absurd. Power brokers and corporate elites don’t meet in dark, smoke filled back rooms or on amusement park merry-go-rounds but rather they gather in well-appointed offices with plush carpets and comfortable chairs and are served croissants and gourmet coffee.

The murder of President John F. Kennedy on November 22, 1963 is the most discussed, scrutinized and written about assassination in history. The official narrative is that Lee Harvey Oswald acted alone in Dallas and that there was "no evidence of any conspiracy, domestic or foreign." That was the conclusion of the Warren Commission in 1964. However, fifteen years later the House Select Committee on Assassinations said there was a "high probability that two gunmen fired at President Kennedy" and “that he was probably assassinated as a result of a conspiracy.” Information relating to the assassination held in secret at the National Archives was released on Oct. 26, 2017. Curiously, some documents were held back because of “national security” concerns. More than 60% of Americans do not believe the government’s version of what happened. Questions about JFK’s death won’t and may never go away.

Michael Parenti is one of this country’s foremost independent political analysts. Cornel West calls him, “a towering prophetic voice.” He has taught at major colleges and universities in the U.S. and abroad. He is the author of numerous books including the classic Democracy for the Few, Power and the Powerless, The Face of Imperialism, and The Assassination of Julius Caesar.

Be the first to review “Michael Parenti 3-Pack” Cancel reply