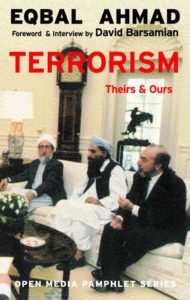 This Open Media Pamphlet Series edition (59 pp.) features edited transcripts from Eqbal Ahmad’s lecture at the University of Colorado, October 12, 1998 and excerpts from David Barsamian’s extensive interviews with Eqbal. It is an excellent primer on the perspectives of Eqbal. Edward Said called him “perhaps the shrewdest and most original anti-imperialist analyst of the postwar world.” You’ve heard the line, a picture is worth a thousand words. Well, that’s the case with the cover of this book. But a funny thing happened. After being available in the Reagan Library archives it has been removed. Might be too embarrassing for the Great Communicator to be seen in the White House with the Afghan “freedom fighters” as he called them. The photo, unlike Mastercard, is priceless.

Eqbal Ahmad was Professor Emeritus of International Relations and Middle Eastern Studies at Hampshire College in Amherst, Massachusetts. He had an extraordinary life. He was born in Irki, Bihar to an Indian Muslim landowning family. His father was murdered because he was parceling out land to peasants. Upon the partition of India in 1947 he went to Pakistan. He came to the U.S. to attend Princeton. He was in Algeria during the revolt against French rule. For many years he was managing editor of Race and Class. His articles and essays appeared in The Nation and other journals throughout the world. He wrote a weekly column for Dawn, Pakistan’s oldest English newspaper. He was one of the most original and influential anti-imperialist thinkers of his era. He was a leading figure in the anti-Vietnam War movement. He was a remarkable and persuasive orator. As a teacher, he was mentor and inspiration to many. He was a close ally of Edward Said, Noam Chomsky and Howard Zinn. Edward Said called him “an intellectual unintimidated by power or authority.” Confronting Empire and Terrorism Theirs & Ours are the two books he did with David Barsamian. Eqbal Ahmad died in Islamabad on May 11, 1999.

One of America’s most tireless and wide-ranging investigative journalists, David Barsamian has altered the independent media landscape. His weekly radio program Alternative Radio is now in its 34th season. His books with Noam Chomsky, Eqbal Ahmad, Howard Zinn, Tariq Ali, Richard Wolff, Arundhati Roy and Edward Said sell around the world. His latest book with Noam Chomsky is Global Discontents: Conversations on the Rising Threats to Democracy. He lectures on world affairs, imperialism, capitalism, the media, and the eco-crisis. In 2017 Radical Desi in Vancouver presented him with their Lifetime Achievement Award. He has collaborated with the world-renowned Kronos Quartet in events in New York, London, Vienna, Boulder and San Francisco. David Barsamian is the winner of the Media Education Award, the ACLU’s Upton Sinclair Award for independent journalism, and the Cultural Freedom Fellowship from the Lannan Foundation. The Institute for Alternative Journalism named him one of its Top Ten Media Heroes.

Be the first to review “Terrorism: Theirs & Ours” Cancel reply