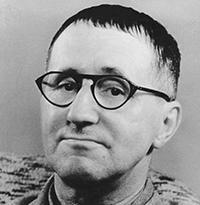 Bertolt Brecht, playwright and poet was one of the great cultural figures of the 20thcentury. He was born in Germany in 1898 and died in 1956. His views on Marxism permeated his work. He was anti-fascist and anti-imperialist. He left Germany after Hitler came to power in 1933.  He eventually ended up in the U.S. He was called before the House Un-American Activities Committee on October 30, 1947. He ran circles around his inquisitors. Seeing the handwriting on the wall he left for Europe the next day, never to return. His important works include The Threepenny Opera and Rise, Fall of the City of Mahagonny and Happy End all with music by Kurt Weill. He wrote such dramas as Life of Galileo, Mother Courage and her Children, The Good Person of Szechwan, The Resistible Rise of Arturo Ui and The Caucasian Chalk Circle. He established the Berliner Ensemble in East Berlin.