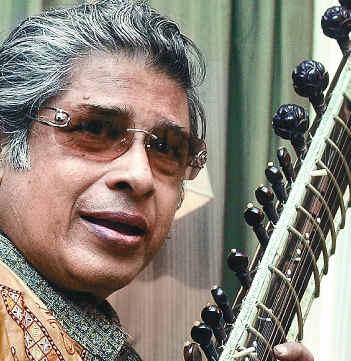 Winner of the Padma Bhushan, one of India’s most prestigious awards, Pandit Debu Chaudhuri, was a legendary figure in Indian classical music. He was born in 1935 in what is now Bangladesh. He took up sitar at an early age. He was a disciple of the great sitar master, Ustad Mushtaq Ali Khan of the Senia Gharana, the traditional school of Indian classical music named after Tansen, the father of Indian music. Debuji’s playing was noted for its sweetness and sensitivity. He was the beloved guru of AR’s David Barsamian. Debuji and his son Prateek, also a noted sitar virtuoso, both passed away in New Delhi in the Covid-19 pandemic in May 2021.