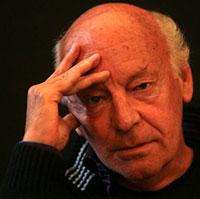 Eduardo Galeano of Uruguay was one of Latin America’s most distinguished writers, journalists, and historians. He was the recipient of many honors including the Lannan Prize for Cultural Freedom and the American Book Award. His groundbreaking book, Open Veins of Latin America changed the way we look at Latin America with its rich and complex cultures, traditions, and diverse political currents. Among his many other books are Memory of Fire, Mirrors, The Book of Embraces, Soccer in Sun and Shadow, Upside Down, We Say No and Mirrors. Of his writing he said, “It’s an attempt to say more with less every time, to transmit the electricity of life through the electricity of words.” He passed away in 2015.