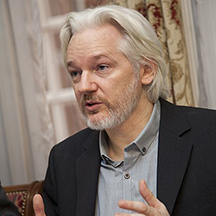 Julian Assange, journalist, activist and computer programmer is the founder of WikiLeaks, the whistle-blowing website. WikiLeaks collects and shares confidential information on an international scale. He sought asylum in the Ecuadorian embassy in London in 2012 to escape allegations of sexual assault. Those charges have since been dropped. Nevertheless, he believes that if he leaves the embassy he will be nabbed by the U.S. and prosecuted for publishing thousands of classified documents made available by Chelsea Manning. In 2016, his work again drew enormous attention when WikiLeaks published thousands of emails from U.S. presidential candidate Hillary Clinton and the Democratic National Committee.