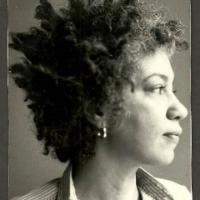 June Jordan, an award-winning poet, essayist and critic, was born in Harlem to parents who were immigrants from the West Indies. She was professor of African American Studies at the University of California at Berkeley, where she was the founder and Director of the Poetry for the People program. Described as “the most published African American in history,” she wrote numerous books including Technical Difficulties, Naming Our Destiny, Affirmative Acts, Poetry for the People, Haruko/Love Poems, and Soldier, a memoir of her childhood. She died in 2002.