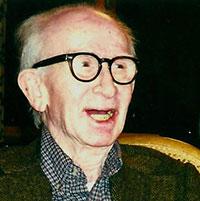 Sender Garlin was  a radical journalist and author of Three American Radicals. Howard Zinn said this about him, “As a reporter, he interviewed such diverse figures as Clarence Darrow, Emma Goldman, Lucy Parsons, Huey Long, Lenin’s widow Krupskaya, and Olga Kniper-Chekhova, the Moscow theater star and widow of the great Russian writer. Sender helped form the John Reed Club in the early 1930s and was a founding editor of Partisan Review before he moved on to write for The Masses. His main thrust and satirical barbs were always against the system: the exploitation, the racism, the militaristic nationalism that have plagued this century, whether in the extreme form of Fascism or in more disguised form.” Sender Garlin died in 1999.