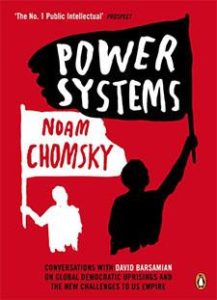 Conversations on Global Democratic Uprisings and the New Challenges to U.S. Empire

In this collection of conversations,  Noam Chomsky explores the most immediate and urgent concerns: the future of democracy in the Arab world, the implications of the Fukushima nuclear disaster, the European financial crisis, the breakdown of American mainstream political institutions, and the rise of the Occupy movement. As always, Chomsky presents his ideas vividly and accessibly, with uncompromising principle and clarifying insight.

The latest volume from a long-established, trusted partnership, this collection shows once again that no interlocutor engages with Chomsky more effectively than David Barsamian. These interviews will inspire a new generation of readers, as well as longtime Chomsky fans eager for his latest thinking on the many crises we now confront, both at home and abroad. They confirm that Chomsky is an unparalleled resource for anyone seeking to understand our world today.

“Sitting down and talking to Noam Chomsky about current affairs has to be one of the most illuminating experiences going. But what if you can’t always think of the best questions? Not to worry: David Barsamian’s interviews with Chomsky consistently ask penetrating and provocative questions. If you’re familiar with Chomsky, he will still manage to surprise you.” ―Political Affairs

Be the first to review “Power Systems” Cancel reply