The decades-long one-sided Washington policy in favor of Israel reached new heights during the Trump regime. The peace process is a joke. The ever-expanding Jewish-only colonies, known euphemistically as settlements, have grown ever larger. The possibility of a sovereign, viable Palestinian state has dramatically receded. Yet, despite the occupation, the Palestinians practice, what is called in Arabic, al-sumud, steadfastness. They stay on the land and resist. What’s next? 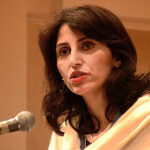 Diana Buttu is a human rights attorney based in Ramallah, Palestine. She served as legal advisor to the Palestine Liberation Organization. Her articles have appeared in The New York Times, The Washington Post and The Globe and Mail. She has been interviewed on NPR, CNN, Al Jazeera, and Democracy Now!

Ilan Pappé is professor of history at the University of Exeter. He was formerly a senior lecturer in political science at the University of Haifa and chair of the Touma Institute for Palestinian and Israeli Studies in Haifa. He is the author of many books including The Ethnic Cleansing of Palestine, On Palestine with Noam Chomsky and The Biggest Prison on Earth: A History of the Occupied Territories.

1 review for Israel & Palestine: What’s Next?