This program features some of Ernesto Cardenal’s most famous poems including: “The Arrival,” “Zero Hour,” Marilyn Monroe,” and “Ecology.” Some of the poems were recorded during Cardenal’s 1985 tour of the U.S. “Zero Hour” has original music composed by Bob Ellis. The poems are recited first in Spanish and then in English. Latin American poetry specialist, Steven White discusses Cardenal’s work. Participants: Ernesto Cardenal, Roberto Vargas & Steven White.

Funded by a grant from the Boulder Arts Commission and part of David Barsamian’s World Poetry Series on KGNU. 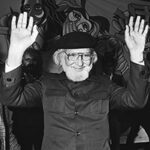 Ernesto Cardenal was a Nicaraguan theologian and poet. He was the author of more than thirty-five books, many translated into multiple languages. He was nominated for the Nobel Prize in Literature. Cardenal was an ordained Catholic priest from 1965 until 1983. He left the church to serve in the Sandinista government as Minister of Culture until 1987. He lived in Managua, where he was vice president of Casa de los Tres Mundos, a literary and arts cultural organization. His collection of poetry in English is The Origin of Species and Other Poems. He passed away in 2020 at the age of 95.

Be the first to review “Poetry Reading” Cancel reply