Outsourcing the War on Terror

When the U.S. goes to war, private contractors salivate. When it comes to making money, there is no business like war business. Control or oversight? Not much. There is a feeding frenzy at the troughs of public money accompanied by the almost inevitable cost overruns, waste, fraud and theft. The corruption is fueled by the revolving door syndrome between corporations and the Pentagon. Almost seamlessly, today’s assistant secretary of defense becomes tomorrow’s vice-president of Raytheon. An April 2014 report from the Pentagon’s own Inspector General says the Defense Department isn’t properly keeping track of senior officials who leave the government to take jobs with defense contractors. Among the problems the report identified, records are kept in different locations and many are missing, particularly at the Defense Logistics Agency and the National Security Agency — “organizations with substantial contracting activity.” 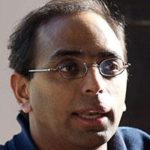 Pratap Chatterjee is an independent journalist and radio producer. His articles appear in the Financial Times, The Guardian and The Independent. He has won five Project Censored awards as well as a Silver Reel from the National Federation of Community Broadcasters for his work in Afghanistan, and the best business story award from the National Newspaper Association. He is the author of Halliburton’s Army, Iraq Inc.: A Profitable Occupation and The Earth Brokers.