The LGBTQ, lesbian, gay, bi-sexual, transgender and queer community have made significant strides in recent years in achieving legal recognition and protection. But some of the gains are being rolled back. The Trump administration revoked federal guidelines specifying that transgender students have the right to use public school restrooms that match their gender identity. Resistance to the edict is coalescing as fast as you can say LGBTQ. An important case will be argued soon before the Supreme Court involving a high school student in Virginia. At stake is whether transgendered persons are protected under Title VII of the Civil Rights Act of 1964 and Title IX of the Higher Education Act amendments. At issue is whether they can freely use public rest rooms. The case pits evolving generational attitudes toward gender non-conformism against a longstanding culture of intolerance. 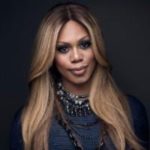 Laverne Cox is an actor, documentary film producer and LGBTQ advocate. She stars in the highly acclaimed Netflix series Orange Is the New Black. Her documentary productions include The T Word and Free CeCe.

Be the first to review “Transgender Visibility” Cancel reply