Mirza Asadullah Khan Baig known by his pen name Ghalib was Urdu’s finest poet and master of the ghazal, love poem. He was born in Agra in 1797 and died in Delhi in 1869. His range, imagery, and command of language are stunning. Today his poems are recited by South Asians everywhere. This recording was made to commemorate his death centenary. It features the incomparable ghazal singers Begum Akhtar and Muhammad Rafi performing some of Ghalib’s most famous poems. Kaifi Azmi, a noted mid-20th century Urdu poet reads passages from Ghalib’s letters linking the ghazals and providing biographical and historical background. The ghazal lineup:

Begum Akhtar, the legendary singer, was known as mallika-e-ghazal, the queen of ghazal, ghazal is an Urdu poem. Her musical sensibility and feeling for lyrics were unmatched. She was born in Faizabad in 1914 in Uttar Pradesh state in northern India. Early in her career she was known as Akhtari Bai Faizabadi. In addition to her mastery of ghazal, she excelled in thumri and dadra, light classical forms. She passed away in 1974. 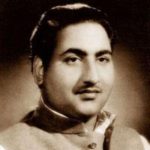 Muhammad Rafi (1924-1980) was an amazing Indian vocalist. He was one of the leading playback singers of the Bollywood film industry. He was also a great ghazal singer. He was the recipient of the National Film Award, Best National Singer Award and six Filmfare Awards. In 1967, he was honored with the Padma Shri award by the Government of India.

Be the first to review “Portrait of Ghalib” Cancel reply