The Poetry of Juan Ramón Jiménez

Features Jiménez poetry read in Spanish–including a reading by the poet himself–as well as in English translation.  Prof. Yvonne Guillon Barrett of the University of Colorado provides commentary on his life and work.

Produced and hosted by David Barsamian as part of his Pyrenees to the Andes Series on the poetry of Spain and Latin America, Funded by a grant from the Colorado Endowment for the Humanities. 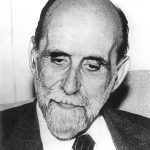 Juan Ramón Jiménez Mantecón (23 December 1881 – 29 May 1958) was a Spanish poet, a prolific writer who received the Nobel Prize in Literature in 1956 “for his lyrical poetry, which in the Spanish language constitutes an example of high spirit and artistical purity”. One of Jiménez’s most important contributions to modern poetry was his advocacy of the French concept of “pure poetry.”