The Poetry of Nicolás Guillén

Features Nicolás Guillén’s poetry read in both Spanish and in English translation as well as commentary on his life and work. With the participation of Prof. Yvonne Barrett of the University of Colorado.

Produced and hosted by David Barsamian as part of his 20th Century Latin American Poetry Series. Funded by the Colorado Humanities Program 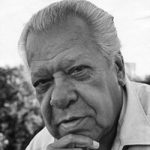 Nicolás Guillén was a Cuban poet, journalist, political activist, and writer. He was named the national poet of Cuba in 1961. His poetry was written usually in the language and rhythm of Cuba’s poor blacks. His poems form an important part of the Afro-Antillean black poetry, poesia negra movement. He died in 1989.