The Poetry of Delmira Augustini

Delmira Augustini of Uruguay was an important and innovative poet. She was part of the Generation of 1900. Her poems dealt with female sexuality and eroticism. She was murdered by her husband in 1914. Her poetry is read in both Spanish and in English translation as well as commentary on her life and work by Prof. Yvonne Barrett of the University of Colorado.

Produced and hosted by David Barsamian as part of his Pyrenees to the Andes Series on the poetry of Spain and Latin America. Funded by a grant from the Colorado Endowment for the Humanities. 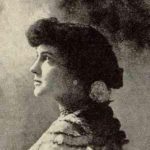