Capitalism, COVID & the climate crisis are interconnected. Capitalism careens from one disaster to another. Its inequalities are grotesque. The pandemic is likely to take on new forms in the future. The climate emergency is all too obvious. The latest IPCC report, the UN agency on climate, makes for sobering reading. It warns that dire impacts from climate change will arrive sooner than many expect. The co-chair of the working group behind the report said, “Without immediate and deep emissions reductions across all sectors, it will be impossible.” Meanwhile, UN Secretary-General António Guterres, said some governments and businesses were “lying” in claiming to be on track for 1.5C. He warned: “Some government and business leaders are saying one thing – but doing another. Simply put, they are lying. And the results will be catastrophic.” 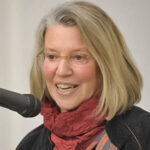 Nancy Fraser is a philosopher, critical theorist, feminist and the Henry A. and Louise Loeb Professor of Political and Social Science and professor of philosophy at The New School in New York. She is known for her critique of identity politics and her work on the concept of justice. She is also a staunch critic of contemporary liberal feminism and its abandonment of social justice issues. She is the author of Fortunes of Feminism and Cannibal Capitalism.