As protests and demonstrations continue around the world, once again the relevance of the strategies and tactics of civil disobedience and nonviolent resistance arise. What are we to do when faced with injustice? Look away? Or resist? Are sit-ins, blockades and boycotts viable tools of resistance? Do people risk arrest and incarceration? Thoreau, who was an influence on Mahatma Gandhi and Martin Luther King, Jr., went to jail for refusing to pay taxes. He was a principled opponent to slavery and the U.S. war on Mexico. As the story goes, his friend, Ralph Waldo Emerson visited him in jail. Emerson asked Thoreau, What are you doing in there? To which Thoreau replied, “What are you doing out there?” Going against power is not easy. Gandhi, who went to jail many times said, “Nonviolence is a weapon of the strong.” 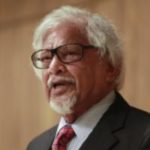 Arun Gandhi is the grandson of India’s apostle of nonviolence, Mohandas Karamchand “Mahatma” Gandhi. In 1991, Arun Gandhi and his wife Sunanda, founded The M.K. Gandhi Institute for Nonviolence in Memphis, Tennessee. An author, journalist, and activist, he lectures all over the world.