A chilling eyewitness account of the terror in Chile in the wake of the 1973 coup. Branded as one of the ten most wanted men in Chile, Gonzalez describes his incarceration and the internal resistance to the Pinochet dictatorship. He says the U.S./CIA involvement was “decisive in the overthrow of Salvador Allende.”  The UN and the World Council of Churches put pressure on the regime to release him and he was expelled to Mexico. The program concludes with the great folk ensemble Quilapayun performing the stirring anthem, “El Pueblo Unido.” A bi-lingual program. Angela Della Sante of the Latin American Institute is the translator. 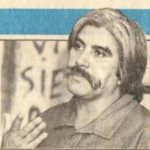 Francisco Gonzalez of Chile is a prominent trade union leader, organizer and political activist.  He is from a working class family from the province of Coquimbo.

Be the first to review “Chile: State of Siege” Cancel reply