A spirited defense of the First Amendment and in particular connecting it with censorship of student newspapers and their right to free expression. Hentoff approvingly quotes Supreme Court Justice Abe Fortas who says, “Students have fundamental rights and should not be seen as closed circuit recipients of only what the state wishes to communicate.” Hentoff explains why he is a staunch opponent school prayer. He recounts his painful childhood memories of being subjected to Christmas carols. His lecture at Fairview High School is preceded by an interview on KGNU’s Hemispheres program by David Barsamian. 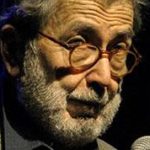 Nat Hentoff was a historian, novelist, music critic, and syndicated columnist. He was a staunch supporter of freedom of speech and freedom of the press. He was the author of Free Speech for Me-But Not for Thee and The War on the Bill of Rights. He was the jazz critic for The Village Voice from 1958 to 2009. He died in 2017.