The Russian invasion of Ukraine with its horrific atrocities and massive refugee crisis has turned the world upside down. The war will have a huge impact on global food security as both countries are major exporters of wheat, barley and other grains. As usual, the media provide very little context and background. We are told ad nauseum that the Russian invasion was unprovoked. A careful look at history reveals a slightly more nuanced picture. To explain is not to excuse Moscow’s criminal attack. Meanwhile, as two-time legendary Medal of Honor winner Marine Corps General Smedley Butler reminds us, “War is a  racket.” U.S. weapons corporations are lining up to feed at the trough. Before the war is over many Ukrainians and Russians will die while Raytheon, Lockheed Martin and Northrop Grumman will make money hand over fist. 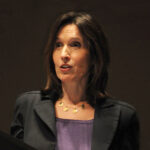 Katrina vanden Heuvel is the editorial director and publisher of The Nation magazine. She writes a weekly column for The Washington Post. She has edited or co-edited such books as The Change I Believe In and Voices of Glasnost: Interviews with Gorbachev’s Reformers.