The self-hatred among communities affected by racism manifests itself in a number of ways. Speaking specifically from an African American context, bell hooks discusses the contrasting psychologies of victim-hood and triumph and how at their extremes, both of these narratives may prove to be problematic. Providing and critiquing salient examples from both history, as well as contemporary pop culture, she describes how, often, these end up reinforcing the white man’s image of blackness. She goes on to suggest a more holistic approach to navigating the struggle to find the self and identity that racial minorities must face in a white supremacist society.

Recorded at the Z Media Institute. 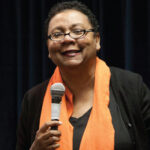 bell hooks was an award-winning writer, feminist and activist who focused on the intersection of race, class and gender. She taught at Yale, Oberlin and the City College of New York. She is the author of such books as Killing Rage, Black Looks: Race and Representation and Yearning: Race, Gender, and Cultural Politics. Her book Ain’t I a Woman?: Black Women and Feminism: was called “One of the twenty most influential women’s books in the last 20 years.” She died in 2021.