A year after the 9/ 11th attacks the U.S. government is still not willing to examine the real source of global discontent. And why do they hate us, as many media figures have asked in hurt, confused tones? When you look beyond the mainstream U.S. media, journalists and intellectuals throughout the world point to the spectre of U.S. imperialism as the obvious culprit in breeding desperation and terrorism. We now have military bases in over 60 countries. We give more aid to Israel, a first world country, than all of sub-Saharan Africa combined. U.S.-backed sanctions against Iraq have led to the deaths of half a million Iraqi children – a price, according to Madeleine Albright, the U.S. is willing to pay. Questioning U.S. foreign policy is considered almost blasphemous – grounds for suspicion and investigation. According to a State Department report issued before September 11th, U.S. involvement overseas increases the chances of terrorist attacks. It seems that failing to question U.S. policy may be the most dangerous path to follow. 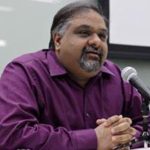 Rahul Mahajan, a doctoral candidate in sociology at the University of Wisconsin-Madison, is the author of The New Crusade and Full Spectrum Dominance.

Be the first to review “The New Crusade: America’s War on Terrorism” Cancel reply