The Israeli-Palestinian issue is often described as intractable and complex. Pundits and scholars tell us it is an extremely complicated problem, i.e., be intimidated and leave it to the experts. The media and popular culture routinely depict Palestinians as kaffiyeh garbed terrorists brandishing AK-47s. Israelis, on the other hand, are a lot like us, whatever that means. Peace conferences are convened from Madrid to Moscow. Terms like territorial compromise, loan guarantees, land for peace, confidence building measures and settlements fill the airwaves. In this program, retired Israeli Major General Matti Peled charts the political topography of the Israeli Palestinian question and presents an analysis that is excluded from the network news. 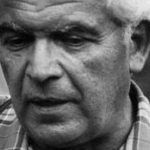 Matti Peled was, from 1941 to 1949, a member of Palmach, the strike force of the Haganah, the Jewish defense organization. Gen. Peled served in the 1956 Suez War and was later appointed military governor of the Gaza Strip. Matti Peled taught Arabic at Tel Aviv University and was chair of the Israeli Council for Israeli Palestinian Peace. He died in 1995.

Be the first to review “Israeli-Palestinian Peace: Prospects and Obstacles” Cancel reply