Hezbollah, the Party of God, was formed in 1982 in the wake of the Israeli invasion of Lebanon. Naim Qassem, Hezbollah’s second in command, talks about the Lebanese resistance group which is routinely described as “terrorist” by Washington and Tel Aviv. What are its origins, politics and goals? 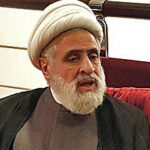 Naim Qassem, a senior cleric, is the Deputy Director General of Hezbollah and author of Hezbollah: The Story from Within.

Be the first to review “Hezbollah” Cancel reply