The South, Slavery & the Lost Cause

The Lost Cause is rooted in the South’s search for justification and the need to find a substitute for victory in the Civil War. In attempting to deal with defeat, the South created an image of the war as a noble epic fought by brave men. The war, the mythology goes, wasn’t about preserving slavery it was about Southern values. Monuments to Confederate soldiers and the naming of military bases not only glorifies militarism but are everyday reminders of white supremacy and the subordination of slaves. Slavery, free labor for centuries, created huge wealth for the plantation master class. To heal and repair we need an honest accounting of history. Some monuments have come down and military bases may be renamed. We can’t continue to mythologize the past. 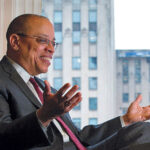 Jeffery Robinson is a deputy legal director and the director of the ACLU Trone Center for Justice and Equality.

19 reviews for The South, Slavery & the Lost Cause