Fifty years after the Watts uprising in LA what has changed in terms of institutional racism? The supposed post-racial U.S. ushered in by the election of Barak Obama as president seems more symbolic than substantive. Killings and abuse of African Americans by state security forces continue at an alarming rate as do high levels of incarceration. Jim Crow has taken on new shapes and forms. Schools, particularly in the South, are resegregated. The spate of well publicized police shootings and chokings has sparked a Black Lives Matter movement demanding systemic change not cosmetic reforms. Serious questions are being raised about tactics and strategies, pacifism and civil disobedience and the role of electoral politics. How can equality and racial justice be achieved? 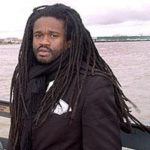 Osagyefo Sekou is an author, documentary filmmaker, public intellectual, organizer, pastor and theologian. He is the author of Gods, Gays, and Guns: Essays on Race, Religion, and the Future of Democracy. He has been active in Ferguson on behalf of the Fellowship of Reconciliation, the country’s oldest interfaith peace organization. He has led trainings in nonviolent civil disobedience. Cornel West calls him “one of the most courageous and prophetic voices of our time.”