In 1971, Nixon launched a war on drugs calling drug use “public enemy number one.” Since then like a recurring nightmare various presidents have continued the war on drugs. Four decades on, a consensus has emerged that the war has not only failed but it has ruined countless lives and wasted tons of money. More than a $1 trillion has been flushed down the toilet. Despite evidence that punitive measures backfire, our jails and prisons are full of people convicted for smoking weed. There are clear signs that attitudes on drugs, particularly marijuana, are shifting. Latin American countries with Uruguay leading the way are hitting the reset button. Uruguay has legalized the consumption, sale and distribution of pot. The time is long past to develop new mechanisms to establish humane and sustainable alternatives to the drug war, especially cannabis. 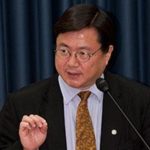 Sanho Tree is a Fellow at the Institute for Policy Studies and director of its Drug Policy Project, which works to end the domestic and international so-called War on Drugs and replace it with policies that promote public health and safety. He has been featured in over a dozen documentary films and has appeared in hundreds of print and broadcast interviews.

2 reviews for End the Drug War