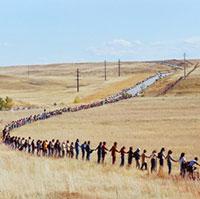 David Wilson is station manager at KGNU Community Radio, where Alternative Radio began in Boulder, Colorado. He reported extensively on the Rocky Flats nuclear weapons facility during the 1990’s. His AR radio documentary on the history of protest at Rocky Flats received a Golden Reel Award from the National Federation of Community Broadcasters in 1999. Along with working as a radio producer, Mr. Wilson has practiced intellectual property law as an attorney since 2008. He received his masters degree in physics from the University of Oxford, where he studied on a Rhodes Scholarship.