The Future of Media

The Digital Age has transformed the traditional media landscape. The so-called Fourth Estate is reeling. Thousands of journalists have lost their jobs. Newsrooms have shrunk. Beats have been eliminated. Bureaus have closed. Many important stories are given short shrift or not covered at all. Investigative journalism may soon be an endangered species. City hall and statehouse coverage has been particularly hard hit. Large parts of the country are served by one or no local newspapers. Internet giants like Facebook and Google, swimming in cash, run stories from hard-working reporters without offering fair compensation. It’s a brutal scene. An uninformed or half-informed citizenry undermines democracy. Craig Aaron of Free Press warns, “There are incredibly important decisions being made in Washington that shape the future of media. But they’re being done without the public’s involvement or consent.” 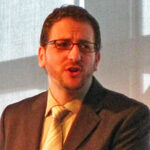 Craig Aaron is the director of Free Press, a non-profit organization dedicated to safeguarding Net Neutrality, defending public media and sustaining quality journalism. His articles have appeared in The Guardian and The Progressive.

1 review for The Future of Media