From a Nun on the Bus

B.B. King sings, “Nobody likes you but your mama and she may be jiving you too.” A lot of poor people may feel that way. They are stigmatized and demonized. If they’d only go away. What’s wrong with them? Can’t they find a job or a place to live? The persistence of poverty in the U.S., perhaps the richest country in history, is a national disgrace, a shanda as they say in Yiddish. Neoliberal economic policies have produced huge inequality. Who suffers the most? Children. Almost 15 million children were poor in 2015, with more than two-thirds in working families who toil away in our low-growth, low-wage economy. A disproportionate number are Black, Latino and Native American. There’s no money to alleviate poverty, we’re told. Are you kidding?  There’s plenty of dough to enrich the imperial war machine. 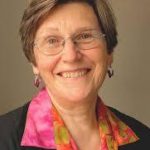 Simone Campbell is a Catholic nun and an attorney who lobbies in Washington on issues of economic justice, immigration reform, and healthcare. She belongs to the Sister of Social Service and is the executive director of the NETWORK Lobby for Catholic Social Justice.  Campbell’s recent memoir is A Nun on the Bus.

1 review for From a Nun on the Bus