The Poetry of Mirza Ghalib

This program features some of the most famous poems by Urdu’s greatest poet Mirza Ghalib. He was born in Agra in 1797 and died in Delhi in 1869. His birth name was Asadullah Khan. Mirza is a title indicating high rank or nobility. In his early poems he used the pen name Asad, which means lion. Later he took the pen name, Ghalib, which means dominant, which indeed he was. He died in Delhi. Among the featured poems, ghazals, are such classics as “Bus ke Dushwaar hai,” Muddat hui hai,” “Ye na thi Hamari Qismat,” and “Bazeecha-e-Itafaal hai.” You will hear the original poem recited in Urdu by Asad Zaidi and then sung by either Begum Akhtar or Muhammad Rafi, followed by the English translation. Begum Akhtar and Muhammad Rafi of India were two giants of ghazal singing and both had a particular affinity for Ghalib’s poetry. Produced and hosted by David Barsamian as part of his World Poetry Series on KGNU. 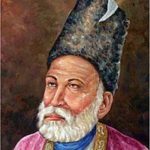 Mirza Asadullah Baig Khan known by his pen name Ghalib was Urdu’s finest poet and master of the ghazal, love poem. He was born in Agra in 1797 and died in Delhi in 1869. His range, imagery, and command of language are stunning. Today his poems are recited by South Asians everywhere.