The Poetry of Alfonsina Storni

Alfonsina Storni was an important 20th century feminist poet. She challenged the norms of conventional Argentinian and Latin American society. Her poems are read in Spanish with English translation. Prof. Yvonne Barrett of the University of Colorado discusses Storni’s life and work. This program also features the fabulous voice of Mercedes Sosa of Argentina singing “Alfonsina y el Mar.” With the participation of Ophelia Skaggs.

Produced and hosted by David Barsamian as part of his 20th Century Latin American Poetry Series. Funded by a grant from the Colorado Humanities Program. 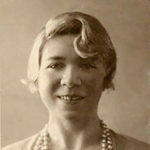 Alfonsina Storni (1892–1938) of Argentina was one of the most important Latin-American poets of the modernist period. A staunch feminist she carved a special niche for herself in the world of Latin American poetry.