When Reagan became president the focus of U.S. foreign policy immediately shifted to Central America. Along with Haig, Kirkpatrick and other courtiers the bogeyman of “Soviet influence” and the specter of “another Cuba” in the region were repeatedly invoked. The bogus dominoes of Southeast Asia had moved to the small, poor countries of Guatemala, Nicaragua, El Salvador and Honduras. The fear mongering and propaganda created a threat where there was none. But the U.S. was worried about the threat of a good example. If one of these revolutionary movements should succeed, particularly in Nicaragua, then the “virus” might spread. This program was broadcast on Hemispheres on KGNU, a weekly public affairs program begun by David Barsamian and Gonzalo Santos. 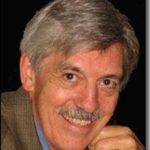 John Dinges is an award-winning journalist who reported on Latin America for The Washington Post. He was a news editor at NPR. He is professor of journalism at Columbia University. He is the author of The Condor Years, Assassination on Embassy Row, and Our Man in Panama.