The history of Indigenous people is full of acts of resistance. One such dramatic action was the seizure of Alcatraz Island in San Francisco Bay by activists from the American Indian Movement. November marks the 50th anniversary of that event. More recently the blockade at Standing Rock in North Dakota galvanized Indigenous communities to defend their land, water, and sacred burial grounds. The Standing Rock resistance injected into public discourse such terms as water protectors and stewards of the land and an awareness that Native peoples have an expanded concept of kinship and family that includes Nature. Despite widespread opposition to the pipeline, Trump authorized its construction. La Lucha Sigue. The struggle for indigenous rights continues.

Recorded at the University of Colorado at Denver. 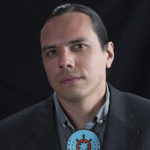