Throughout history, wars have been started for many reasons: wealth, power, politics, religion and love, to name a few. Recent conflicts are no exception, with oil being the paramour in the battle and occupation of Iraq. But does it make sense to wage war to control a commodity that is finite? With oil supplies predicted to be dwindling significantly in a few decades, can this really achieve long-term national security? Besides, the negative impacts of war are numerous and affect us all, not just those directly in the line of fire. Money is siphoned off for the military while social, educational, medical and environmental needs are placed at the end of the line. The world needs to rely less on petrochemicals, not more. Our fossil-fuel-based economy pollutes our air, contributes to global climate change and negatively impacts our health. We must move to a society committed to improving the quality of life and developing clean, renewable fuels. 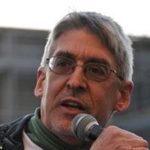 Larry Everest is a journalist, author and videographer covering the Middle East and Central Asia for over 20 years. Shortly after the end of the Persian Gulf War, he went to Iraq to document the impact of the war on the Iraqi people and filmed the award-winning video Iraq: War Against the People. Everest wrote Behind the Poison Cloud: Union Carbide’s Bhopal Massacre, based on his on-the-scene investigation.

Be the first to review “Oil, Power, and Empire” Cancel reply