Is it starry-eyed to think about not just regime change but something much larger: system change? The systemic failures of the current crisis and the calamitous fissures it has exposed has raised the question of the efficacy of reform, half-measures and tinkering around the edges. When under duress, the system is agile enough to make some concessions while crucially leaving the fundamental structures of power intact. From the outside systems can look invincible and impregnable. Just tell that to Louis the XVI in 1789 or the Czar in 1917 or the Shah of Iran in 1979 or Hosni Mubarak in 2011. The noted writer, Ursula LeGuin reminds us, “We live in capitalism. Its power seems inescapable. So did the divine right of kings. Any human power can be resisted and changed by human beings.” 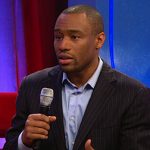 Marc Lamont Hill is a professor of Media Studies and Urban Education at Temple University in Philadelphia. Ebony named him one of America’s 100 most influential Black leaders. He is the author of Nobody: Casualties of America’s War on the Vulnerable from Ferguson to Flint and Beyond.

3 reviews for Dismantling the System