Genocide: A Problem from Hell

From Rwanda to Darfur, modern history is haunted by acts of systematic state violence. In 1915 when Turkey sent its Armenian population on death marches into the desert, U.S. ambassador Henry Morgenthau denounced what he called “race murder.” Raphael Lemkin, a Polish lawyer, was appalled by the Turkish destruction of the Armenians and tried to get European countries to criminalize the wholesale extermination of ethnic and religious groups. His efforts were unsuccessful. During the Holocaust, Lemkin lost many family members in the German mass murder of Jews. He resolved to devise a word that would convey the horror. He coined the term genocide. He gave the crime a name and it led to the 1948 UN Convention on Genocide. But when do atrocities become genocide? At times for political purposes, the term is invoked promiscuously as a cover to justify intervention. 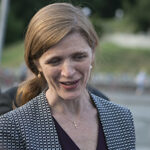 Samantha Power reported on the Balkan wars for various newspapers and magazines. She was the founding executive director of the Carr Center for Human Rights Policy at Harvard. Her book, A Problem from Hell: America and the Age of Genocide won the Pulitzer Prize. She was U.S. ambassador to the UN during the Obama administration.

2 reviews for Genocide: A Problem from Hell